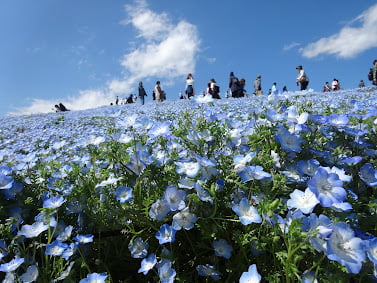 Many consider this one of those places that you just have to see and experience before you die. Hitachi Kaihin Koen – or Seaside Park is most famous in the spring. about 2 weeks after the cherry blossoms from mid-April to early May when the Nemophilia or Baby Blue Eyes(plant) bloom on Miharashi Hill creating a scene where the ground meets the sky in blue. There are over 4 million Nemophilia on this hill. This place used to be a military space, The Japanese military. After the war, it became the training ground for the US military And then it was returned to Japan , it became a national park. Now it is a beautiful park full of happiness for the visitors. This is the site of the United States Air Force’s Mito’s ATG (Air-to-Ground) bombing range. When the land was handed back to Japan in 1973, It was cleared out of dangerous debris and made into a national park for the purpose of peace. It was opened in 1991. So many people come, even visitors from abroad.It is best to visit on a sunny day.. Flowers are a living thing. so when it rains, it will close. On cloudy days, it may not look so well It’s a large park and you need to have a map to get around. Or follow the signs. There are 7 different areas each with its own theme in the park. To cover it all, you can rent a bicycle! There are paths for riding that are ideal for one — or two! There are several foods and drink places here. So whether it’s a date, a family outing, or a group gathering with friends there is something for everyone. Hitachi Kaihin Koen is one of the most amazing national parks you can ever visit in Japan combining amusement with nature. Knowing what this area used to be more than a half-century ago makes this place so much more meaningful. If you’ve got a free afternoon especially in late April this national park in Hitachi will absolutely leave you smiling. 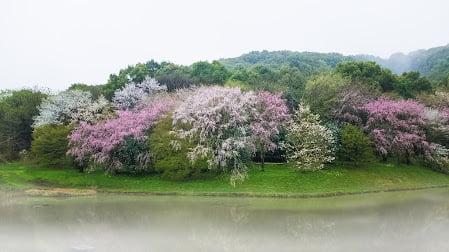 The cherry blossom, or’sakura,’ is a Japanese symbol that adorns the trees in the spring.These beautiful flowers attract many local and international visitors who have an eagerness to see these beautiful flowers for themselves The skura season surely is a must-see, yet among the most common questions for those visiting Japan in springtime is When is the best time to see the cherry blossoms? Well, allow us to fill you in First off, it’s important to point out that the timing of the cherry blossoms each year is heavily determined by the temperature At any particular location, the duration of the blooming period is about 8-10 days given ideal weather conditions but this can be shortened by strong wind and the rain which can cause the pedals to fall sooner The first cherry blossoms appear in the southern islands of Okinawa and Kagoshima prefectures in late January to mid-February. 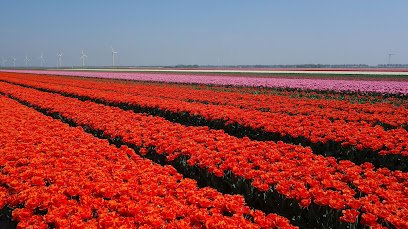 The Tulip was originally a wildflower growing in the Ottoman Empire. “Tulip” is derived from the Turkish word called “turban”. In the winter of 1636, there was a “Tulipomania” in the Netherlands. A few decades ago the area belonged to the sea.It is now densely packed with brightly coloured flowers. These are the same colors that inspired “Vincent van Gogh”. Netherland is mainly famous for Tulips. You can visit the enchanting flower bulb fields. and can see over 7 million flower bulbs at the Keukenhof. The tulip fields pf Netherland are best at the end of April. The number of tulip farms in Holland are situated in the Noordoostpolder. 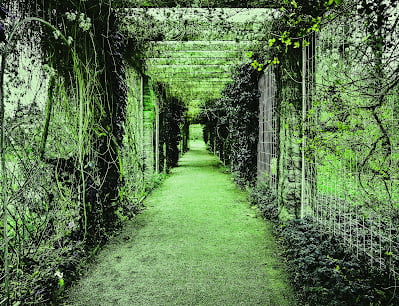 The Tunnel of Love is located near Klevan, Ukraine. It is a 3 to 5 kilometre long railway surrounded by green arches.. It is one of the favorite places for couples to take a walk. The railway tracks through the tree tunnel make a lovely place for couples for a short leisurely walk. Because of this romantic setup around this place, it is named the “Tunnel of Love.” It is also known as the Green Mile Tunnel, because of its bright leafy branches that arch over the railway. The tunnel is at its most attractive period during the spring and summer when the trees are at the peak of their leafiness. 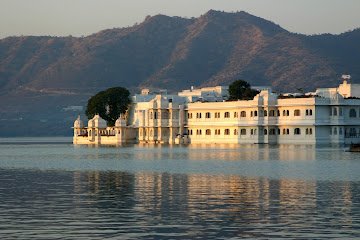 Best places to visit in india